9 Major Causes Of Drug Addiction And Substance Abuse In Teenagers 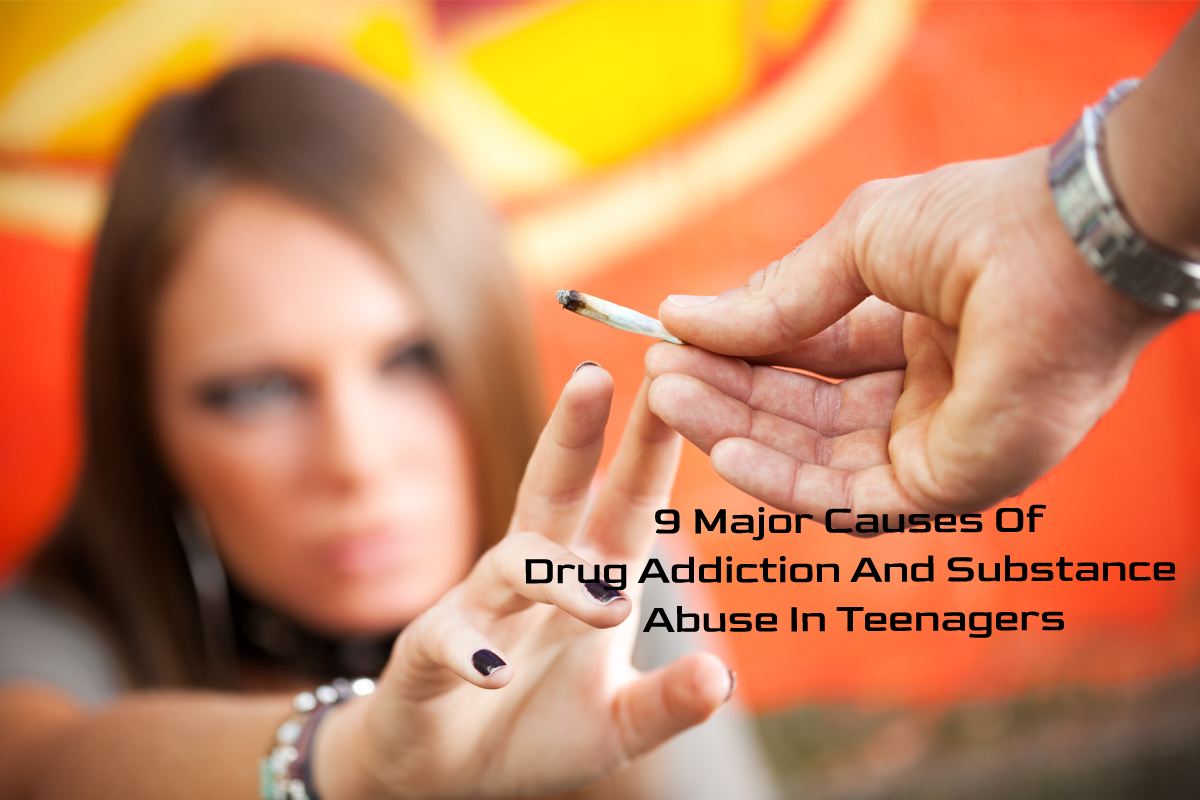 Causes Of Drug Addiction in Teenagers who dabble with drugs and alcohol are often thought to be “bad kids.”
Many parents believe that their children experiment because they are rebellious and want to vent their frustrations.

That may be why only a small number of today’s youngsters experiment with drugs and alcohol, but the alarming trend is not so straightforward or one-sided. You must put yourself in their shoes and envision what they go through every day in order to understand their bad choices.

However, if your teen is suffering from drug addiction, and substance abuse, you can take him to Gallus Detox. Click https://www.gallusdetox.com/locations/colorado/denver-detox-center/ to get more information on their recovery services.

What Are The Causes Of Drug Addiction In Teenagers?

Some teenagers turn to drugs and alcohol to escape the harsh realities. They consider these substances as a way to forget and feel better when they are sad or upset.

It’s their way of self-medicating. You may dismiss a glum demeanor by saying they are “just being a teenager,” but there could be underlying sadness.

If you give your adolescent more chores or extracurricular activities to participate in so that he doesn’t have time to consider substance abuse, that may be a solution to this problem.

For a rapid way to lose weight, female teenagers frequently turn to stronger substances like cocaine. Young girls, particularly in high school, grow increasingly self-conscious of their bodies and may feel compelled to slim down to catch the attention of popular boys.
These young women could be dealing with a co-occurring eating condition like anorexia or bulimia. So, instead of reprimanding them, you must take them to therapists, or to a nutritionist.

Many teenagers, especially those in their first year of high school, are shy and have difficulty making friends. They use drugs and alcohol to connect with a social group that is known to use these substances.

This isn’t the same as explicit societal pressure; instead, it arises from a desire to connect with others and form friendships. So, encourage your children to participate in groups and activities that can help them develop healthy friendships.

Low self-esteem in teenagers can lead to self-destructive behavior owing to physical appearance or a lack of friends. It can also lead to mental health issues if not treated right away
Teenagers are pressured by social media, bullies, and often their families to act and look a specific way, and if they don’t reach those high expectations, they lose confidence in themselves. The use of drugs and alcohol appears to be a simple method to increase their confidence.

The use of drugs and alcohol to enhance specific experiences is a common reason why teenagers start experimenting with drugs. Cocaine and Adderall are widely used to boost energy and attention when people feel unable to do tasks on their own and require assistance.

Ecstasy can be used to help people lose their inhibitions and have a better sexual experience. Marijuana and alcohol are frequently used to unwind and feel at ease in social circumstances.

Teenagers may be genetically susceptible to experimenting with drugs and alcohol and become addicted if there is a previous history of drug addiction in their families.
Although making incorrect decisions is a part of growing up, people cannot be condemned for their genes, especially if they have not been educated. If there is a history of addiction in the family, be honest about the true dangers of substance usage.

They all hear about it and assume it won’t happen to them. However, it’s typically the classic story of peer pressure that leads to drug and alcohol experimentation.

Peer pressure is particularly common between the ages of sixteen and eighteen when youngsters begin to believe that because “everyone else is doing it,” they should as well.

9: They Only Live Once

We know what you are thinking. The concept of ‘YOLO’ is a lame excuse to fall into the trap of drug addiction. But, teenagers frequently feel compelled by societal pressure to try new things and experience as much as possible while they are still young.

How Causes Of Drug Addiction Use Can Lead To Addiction?

Diverse medicines have different effects on the brain, but one thing they all have in common is that they all elevate the level of the chemical dopamine in reward and pleasure circuits in the brain.

Through the release of dopamine, the brain is programmed to stimulate life-sustaining and healthful actions.

However, everyday adolescent activities, such as hanging out with friends, playing sports, listening to music, and all of the other highly motivating experiences for teenagers, stimulate the release of this hormone, but at little levels. This reinforces behaviors that promote learning, health, happiness, and the strengthening of social ties.

When they abuse drugs, the release of dopamine hormone increases significantly. Thus, teenagers who thought of experimenting with drugs once or twice, often fall into the trap of addiction.

There are ample evidence-based treatment options for teenage substance abuse. Effective therapies for teenagers primarily consist of some sort of behavioral therapy, whether given in residential or inpatient settings or in an outpatient setting.

Addiction drugs are not generally approved by the FDA for teenagers, even though they are effective and commonly used for adults. However, preliminary evidence from controlled trials suggests that some drugs may help teenagers achieve abstinence
Therefore, physicians should consider their young patients’ individual needs when designing an individualized treatment plan.

There is no “one size fits all,” treatment option here. It necessitates considering the entire person’s needs, including his developmental stage and cognitive ability, as well as the effect of family, friends, and others in the person’s life, and any other mental or physical health concerns.

These concerns should be addressed concurrently with substance abuse treatment. When working with teenagers, doctors must be prepared to deal with issues such as their patients’ secrecy and their reliance on family members who may or may not be supportive of their rehabilitation.

Therapies and counseling approaches are treatments that have been scientifically examined and confirmed to be helpful in the treatment of adolescent substance misuse.
As you now know the possible causes of teenage drug abuse, you can help them get the treatment they need to better their lives.

For further queries, reach us in the comment box.

Analgesic or Antiemetic – What Is The Best Quality Of Green Borneo Kratom?

Younique Collagen Is Shaking Up Your Skincare Routine

What is Mental Health? – Definition, Essential, Progress, and More

What is Holistic Medicine? – Definition, Principles, Uses, and More